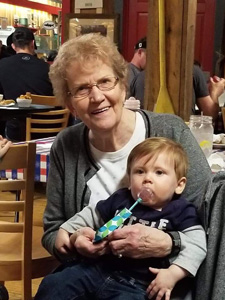 It was dinner time, on October 8, 2019, when Reba began experiencing unusual symptoms.  “My eye felt like it was blurry from flashes of a camera,” she explained.  Her husband noticed her face drooping as she began to fall into the floor.  He immediately called 911.  EMS personnel explained to her husband that Reba was having a stroke and needed to be taken to Fort Sanders Regional Medical Center for stroke care.

Mrs. Crass arrived at the hospital at 7:35pm.  She and her family were initially hesitant about receiving treatment due to the potential risks. They agreed to administer a medication, which can dissolve stroke related clots called tPA; however, it did not fully resolve the blockage.  Meanwhile, Dr. Robert Hixson explained to her family that she needed to have a procedure to remove the clot as soon as possible.  Her husband was considering the weight of his decision when her daughter insisted, “We need to do it now. The doctor said she needs it now!”

Reba recalls being awake for the procedure and her head hurting terribly.  She could feel tears coming down her face and asked if she could wipe them, but she was told it was very important for her to remain still.  Within a few hours following her procedure, she was feeling normal again and upon further testing was able to return home two days later.

Dr. Robert Hixson recounts the evening of Reba’s stroke.  “I was having dinner with my family when I heard a terrible sound coming from my phone. The Viz.ai application was alerting me of a large vessel occlusion,” he explained.  Dr. Hixson, a neuro-interventional radiologist with Vista Radiology, is one of the first in East Tennessee to use new artificial intelligence in early detection of strokes.  “The technology not only allowed me to view CT and advanced perfusion images from my phone without going to my workstation, it also saved approximately 10-15 minutes of Mrs. Crass’ brain suffering from a lack of blood flow,” said Dr. Hixson. Because of Viz.ai technology, Dr. Hixson was able to alert the ER to prepare for her procedure while the patient was still in Radiology and before the images were read by a radiologist at the hospital.

Her procedure began at 8:53pm, and Dr. Hixson had the vessel open by 9:08pm.  She began improving immediately following the procedure and by midnight that evening was completely normal again.  “It has been said nearly 1.9 million brain cells die each minute during a stroke,” said Dr. Hixson.  “That’s why being fast to seek help is so important,” he continued. 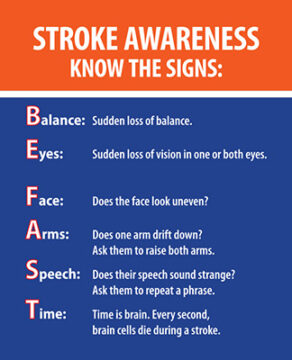 Dr. Hixson explained how the new artificial intelligence software is helping him and his team in stroke care.  “Viz.ai uses an artificial intelligence program to interpret images before they are read by a radiologist on site.  The images from the scan are compared with images in a database, while the patient is still in the CT scanner, and provides an alert when an occlusion is detected. In fact, the software pinpoints the exact location of the blockage.  This advancement is literally saving lives,” he said.

Mrs. Crass, who recently moved to Indiana, is so thankful she has fully recovered.  “God had his hand on me the whole time,” Reba gently shared.  She continued, “We were told that every minute counts when you have a stroke, and I know my husband calling for help so quickly helped save my life.”